Comparisons of the Colcrete Ltd Colloidal Mixers vs. Competitors

Don’t be fooled – all Colloidal Grout Mixers are not alike. The Colcrete mixer utilizes a “true” colloidal mill that shears the cement particles. Other competitors us a centrifugal pump to simulate the shearing action which in reality behaves only as a circulation pump without the high-shear mixing action.

The discharge speed of the colloidal mills coupled to the tangential inlets on the mixing vessel allows a high velocity vortex to be created allowing superior mixing. Competitors often need the assistance of a secondary paddle style mixer to produce a sufficient vortex for mixing.

Generally, the Colcrete Colloidal Mills require more power then the competitors – up to 30hp per mill. This amount of power utilized is directly proportional to the shear rate.

Why use a Colcrete Ltd colloidal mixer?

Internationally recognised as the most efficient method of mixing cement based grouts and other materials used in the construction industry.

Allows a combination of both Colloidal and paddle mixing to occur simultaneously or separately as required.

We manufacture and supply the comprehensive range of Colcrete high pressure ram and piston pumps.

The Colmono range of grout pumps have been market leaders for many years and are
available either as dedicated pumps or in combination with a colloidal mixer.

Agitation tanks are used to provide a storage reservoir for mixed batches of grout from the high speed high shear mixer. Simple mechanical mixing of materials can be achieved in paddle mixing tanks.

The combination of the Colcrete Colloidal Grout Mixer with a Colmono Grout Pump into a self-contained grouting unit, makes a very versatile and efficient piece of equipment.

The system is primarily designed for producing grout for the back filling of ring segments.

The system is primarily designed for the back-grouting of ring segments in tunnels.

What is the definition of a colloidal mixer?

A true colloidal mixer utilises a mil that applies a shearing effect on the media particles, usually cement. Several competing systems use a centrifugal pump to simulate this effect, though this method in reality primarily serves to act as a circulation pump, without the high degree of shearing found in a colloidal mixer.

Why use a Colcrete colloidal mixer?

The quality of the grouting depends greatly on the effectiveness of the mixer used. The Colcrete Colloidal Mixer is the leading colloidal mixer in the industry and is recommended by most grouting experts around the world.

The key element of the colloidal mixer is the colloidal mill. The mill comprises a high speed rotor (or Discar) operating at 2100rpm, inside a close fitting chamber housing. The Discar is free to float horizontally on its mounting shaft with the internal fluid pressures centralising it in the housing. The clearance between the Discar and the housing is approximately 3mm. It is here that a violent turbulence and high shearing action is created which is capable of breaking down clusters of dry cement particles called agglomerates.

The colloidal mill also creates centrifugal force to further mix the grout, and which is capable of generating a maximum discharge pressure of 200kPa and a flow rate up to 850l/min. It is possible to increase the mill’s efficiency as a pump (thus giving a higher pressure capacity) but this would reduce its efficiency as a mixer.

Depending on the required batch size of the mixer, up to four colloidal mills can be used per mixing tank. Each mill requires a suitably rated power source (Diesel, Electric, Hydraulic or Pneumatic). 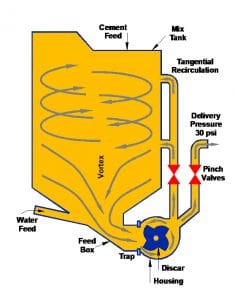 The mixing tank, besides holding all the ingredients, also acts as a centrifugal separator. The centrifugal action of the circulating material spins the unmixed, thicker grout towards the outside of the tank whereas the lighter portions of the mix, i.e. the water and partly mixed grout, move inwards towards the throat of the tank and into the colloidal mill. Once through the mixer this lighter material is discharged tangentially into the outer part of the vortex thus blending with the thicker, unmixed grout. Multiple passes through the rotor produce thicker and thicker grout until the entire mix becomes uniform and the centrifugal action can no longer separate differing densities. At this point the surface of the vortex has a smooth, uniform appearance.

The feed box to the rotor housing is of ample proportion to ensure large lumps of unmixed cement at the start of the mixing cycle are able to pass through to the rotor. These lumps can be quite sticky on the first pass before being broken up.

The output from the colloidal mill is split into two paths. Either the slurry is redirected tangentially back into the drum, to help create the vortex action, or it is discharged. Simple pneumatic or manual pinch valves are used to control this flow.